Challenge: install a triple boot of Retro Pi, Kodi and Raspbian onto one boot card... Accepted.

So a friend asked if I could help him out with this, I have used many triple boot sticks before, but not setup one up for the pi. He sent me a link of a guy who has made this possible... always a little hesitant to follow blindly random people a their builds on something that could easily be a stepping stone into my network. But I want to see if it works.

So going to try to follow the step by step shown here:
http://www.multibootpi.com/builds/retropie-v4-0-2-raspbian-kodi-libreelec-openelec-or-osmc-you-decide/

Wish me luck!
First hurdle, the SD card was formatted to run Retro pi, and so it doesn't look like my windows OS can see or format the whole thing... also my HP USB formatting tool doesn't work for SD cards. So going to try an SD card format tool:
https://www.sdcard.org/downloads/formatter_4/
Turns out it's the same as the guy who posted the tut used.

Using MiniTool partition wizard, I was able to expand the boot partition. Then using windows normal formatting tool I formatted to FAT32.

Following the guides, copied OS onto the USB stick and all the rest onto the SD card, plug it all into the pi and power on..... 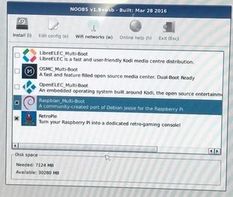 AWESOME! I have an install screen... now to try and work out what version of Kodi is on these "OSMC" options... little google going to try LibreELEC. Oh and changed the keyboard to US and English (US)... because I am nice.

OK so after hitting go, I get told just OSMC will do fine... let see what we get with LibreELEC.

BOLLOCKS! Bloody rubbish thing isn't switching, Kodi is loading OK, updated it, but when selecting Raspbian or RetroPie, nothing....  lets try from scratch.
Scratch isn't working now, formatting to FAT32, etc etc, just wont boot. Hardware is OK, tested it with one of my SD cards with a OS pre-loaded... WHY?!?!?!?!

OK so testing that the SD card works (loaded one of my pre-built images), it struck me... the first thing I did was to load an OS (RetroPi) then I formatted and copied stuff over... is there something to do with turning the SD card into a boot drive? I don't see how, but then I don't see why this is problematic...

Yup! Yes it now works... so loading a boot image to the SD card then formatting it and copying over the new files, it works. Booting to the options. This time I am choosing RetroPie, Rasptain and OSMC... again changing the language and keyboard... perhaps I shouldn't. Lets see.
PASSWORDS!

so SSH seems to be up and running, and found with a little hunting this info from the creator:
​RasPlex – root:rasplex
OSMC – osmc:osmc
OpenELEC – root:openelec
LibreELEC – root:libreelec
Raspbian – pi:raspberry
RetroPie – pi:raspberry
Cushty, working nicely. Bag and tag this experiment is done. Bit rubbish it seems like the tutorials as missing out on a basic first step that without simply doesn't work... what  an arse of a catch-ya!

So Summery of steps needed:

The tutorial was quite good, but it seems to be missing a step. So this is what worked for me:
1- Load an image to the SD Card (like stright up Raspbain image), I did this with win32diskimager
2- Delete the Linux partition and expand the boot partition to the whole SD card, I achieved this using Partition Wizard and normal windows formatting (FAT32)
3- Format the boot USB Stick for FAT32
4- Following the tutorials I copied over the files to SD and USB Stick, adjusting the USB stick for size of each partition. 32GB = 8GB Raspbain, 10GB OSMC and the rest on RetroPie....
5 - Boot up and select the builds to be used.
6- Again following tutorials, get the three images to find each other and set all to boot to OSMC.
7 - Set RetroPie keyboard with Up-arrow, Down-arrow, Left-arrow, Right-arrow, enter (start), space (select), A, B X, Y and the rest was left blank.
8- Boot to RetroPie and copy over the digital copies (ROMs) of the games he owns. Used WinSCP for dumping of files.
DONE (I am sure I should update the apps etc, but time is limited here!).